(I wrote this blog post over a period of three days; from moving out of home to settling in at ANU)

So earlier this week I gave a talk at my high school to the new Year 10 cohort about “Science and the Importance of Being Curious”. Talking about science, curiosity and STEM (science, technology, engineering and maths) education reflecting quite a bit own my own journey and the lack of opportunities there are here in Australia.

I know from personal experience not only how awesome STEM is but also how important it is too, however, does the average 10th grader know? Perhaps you reading this right now without having a clue of what an unbelievably dire situation we’re in as a nation lacking in STEM focused students.

Let’s look at the stats, since numbers and percentages usually get people gasping in awe.

In 2001 the percentage of university graduates in STEM fields was 21.7%. That’s decreased since then to 18%. For comparison, China’s Ministry of Education claims that nearly half (46.9%) of their graduates are within STEM fields!

The below graph from the Australian Bureau of Statistics  is rather telling of what kind of STEM subjects the 15% (2.7 million) of our population are doing. 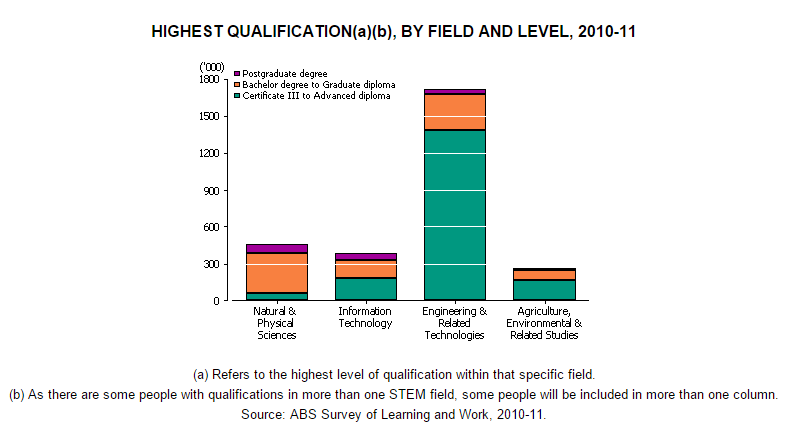 In summary, about 2/3 of STEM students (63%) are in Engineering, and the bulk of those (81%) are only at vocational training level (Cert III). The other third was made up of 17% Natural and Physical sciences, 15% in Information technology and 10% in Agriculture and environmental sciences.

So yeah, Australia is lacking people with STEM training. You might be asking why this may be a big deal in the first place though? It’s not that scientists are lonely and want more nerds for company. The reality of the situation is quite frightening actually, and involves robots taking over the world.

Advancements in automation are a big deal, and by that I mean robots will be taking our jobs, quite literally. Recent reports suggest that up to 35% of jobs in the UK and 47% in the US are at risk of becoming redundant. Similar numbers can undoubtedly be extrapolated for Australia. These aren’t just manual labour jobs either; everything from medicine to financial services and even journalism can and will be replaced by intelligent machines. This means if the kids of today want jobs in the future, they’ll need to be looking at those which require critical thinking, research and higher education – things robots can’t emulate…just yet at least.

If you’ve got 15 minutes to spare, I highly recommend you watch this video on automation and the danger this poses to many jobs by CGPGrey.

It’s interesting, I write this sitting in Sydney airport awaiting my flight to Canberra to continue my own STEM education at the Australian National University. Looking back I can see how important it was taking those crucial first steps in Grades 9 and 10 of investigating and doing my first few serious science assignments. I was one of the lucky few who slipped through the cracks in the system and maintained my childlike curiosity about the world instead of having it bashed out of me through rote (repetitive memorization) learning in science and maths classes. For me, science assignments were an opportunity; an excuse to ask questions and dive into science at my heart’s desire. In Grade 9 I remember doing experiments with potato and lemon batteries to discover how it is you can generate electricity from them, and which one was better. In Grade 10 I went a completely different direction and did a psychology experiment with some of my peers to investigate the effects of classical music on short term memory (yes, Mozart is good study music).

Both of these experimental investigations were an adventure to me. Challenging, sure, but ultimately an exercise in curiosity. And it was through exercising that curiosity that I nurtured my love of science so that I would keep pushing limits with school assignments and opportunities, until eventually I went from potato batteries to nuclear reactors at MIT.

The same kind of journey is possible for all Australian students, however it is quite an uphill struggle. The problem of getting involved in science deeply as an Australian student is twofold. Firstly, opportunities are few and far between beyond school assignments, and secondly, student interest in STEM is severely lacking. STEM education in Australia is a crucial problem we must address, but like any other problem, it can be solved by asking the right questions.

The lack of science and STEM related opportunities may not be immediately evident, but having been to the US and talking to science students not only there but from around the world really highlighted the lack of emphasis we have on celebrating science for high school students. To use the most straightforward and well known example; in the US and many other countries they have science fairs for all ages. In Australia we have virtually none. A quick google search comes up with three small science fairs:

So the first two are international science fairs, which mean they invite students from other countries to present their work at a fair hosted by the associated school. Mind you, both ASMS and JMSS run great programs and are awesome schools, but these are such unique, niche opportunities that the only students who can take advantage of them are those who actually attend those schools. So what about the SEA Fair? Well this one is unfortunately ACT specific, but it’s on the right track (rather ironic to write as I am currently crossing the ACT border in the sky).

There is really only one science fair that is available for any Australian high school student; the BHP Billiton Science and Engineering Awards. Problem is, it isn’t a fair at all, and the only way to enter is through several hoops of accomplishment via student CREST (CREativity in Science and Technology) assignments. Those vegetable battery and psychology experiments I mentioned before were CREST assignments, and generally speaking, most high school students do these. The huge problem here is that the students have no idea of the opportunities available through such assignments! They’re presented simply as another science project, which they must complete in x number of weeks, preferably in y subject, just for a grade at the end of term. I for one, had not the slightest clue back then that if I had put lots of effort into my project I could’ve gotten an award and take part in a national science competition! The most shocking part is that being one of five winners of the BHP awards is the only way to enter the Intel Science and Engineering Fair (ISEF), which is the world’s foremost international science fair! You can see how frustrating it would be, being a science student with utterly no knowledge of how to enter the science world as a high school student.

The point stands especially strong for just a regular student who might want to try their hand at a cool science project. There is simply no way to do such a project and then present it along with other kids your age at a science fair in Australia. If we want to make STEM more prevalent in Australia, opportunities need to be made more visible and easy to join, so that anyone, from a curious public school kid, to a whiz maths prodigy can get involved. Really the one and only big science related thing that any student in Australia can do is the National Youth Science Forum. But even this is highly selective and quite late in education (start of Year 12).

I’ve decided I’m going to leave the second part of this blog on “Inspiring Curiosity” till later, since I am currently finishing this up as I prepare for an “International Soiree Night” at my residential college in ANU. Till then, stay curious!