From a whole new stellarator reactor – the Wendelstein 7-X at the Max Planck Institute, to visualizing energy flows and two new kinds of plasma turbulence discovered which explain heat loss…It’s been a busy few months for the fusion field. All three of these breakthroughs are of massive importance, so I’ll cover each in detail below. Hold on to your lab goggles, it’s about to get science-y here.

The way plasma (a superheated soup of charged particles) behaves, tends to be a tricky thing to predict. Computer models have previously struggled to match up simulations with experimental evidence, which shows that some kind of turbulence keeps on dissipating all that useful heat which is necessary for fusion. Researchers at MIT’s Plasma Science and Fusion Center however finally figured out the “big unsolved problem” that has plagued fusion physics for so long, and have identified two specific forms of turbulence that are responsible for the dreaded heat loss. 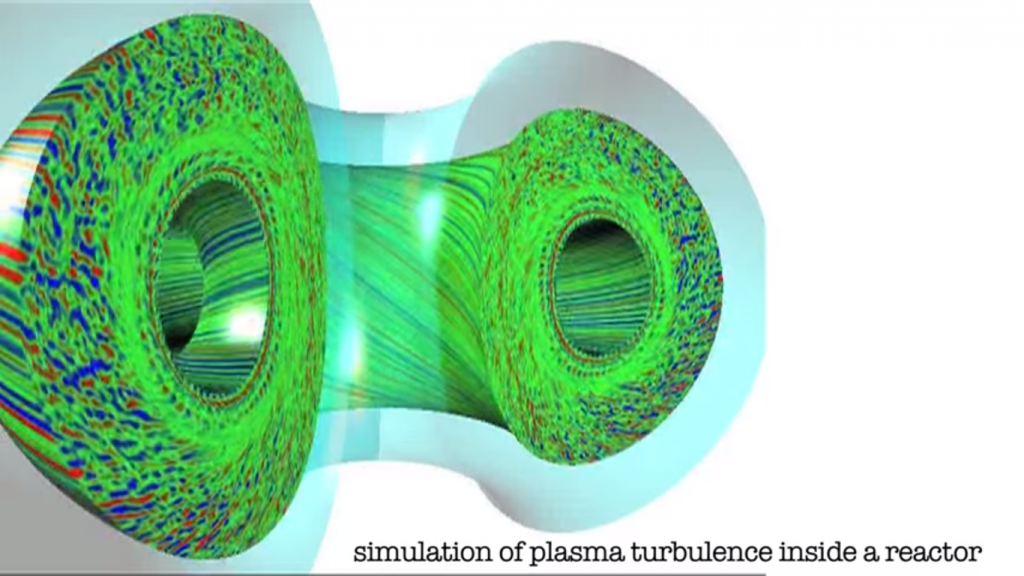 Using the supercomputer at the National Energy Research Scientific Computing Center, 17,000 processors over a course of 37 days achieved a total 15 million hours of computation (fun fact, would’ve taken a Macbook 3000 real life years) which simulated plasma turbulence of ions and electrons. The trick that nobody expected was that electrons, despite being 60x smaller than ions in plasma, still contribute a significant amount of turbulence through swirling eddies which persist in plasma, causing heat loss.

You know what I’m not gonna pretend to understand? These simulations. They kinda look pretty though. (Image Credit: MIT’s YouTube)

The new multi-scale simulations (see above) matched the real data far more accurately, which means fusion scientists now know exactly why all that precious heat is being lost in reactors. MIT collaborated with several national labs to verify the turbulence simulations for various types of magnetic confinement reactors. This means that the findings have a real impact for all future reactors such as ITER, which is a big international collaborative project aiming to build the world’s first breakeven fusion reactor. Understanding why heat loss occurs is the first important step towards optimizing future designs and eventually generate power with fusion.

Yes, it’s name is actually the “Wendelstein 7-X” (W7X for short), and it is indeed something straight out of science fiction. This gargantuan machine fired up successfully a couple weeks before Christmas, making quite a stir in the fusion community. Basically, it’s a huge billion-dollar twisted vacuum magnetic pretzel, built to research the viability of nuclear fusion in stellarator devices. Fusion, in case you didn’t watch the video above, is when two lighter atoms join or “fuse” together to form a heavier one. Some mass of the fuel is directly converted into a lots of energy (eg. The Sun), so for a long time we’ve been pursuing the possibility of utilizing fusion as a power source.

So what’s all this stellerator business about then? A stellarator is a type of nuclear fusion reactor. It uses magnets like most fusion devices to confine the million degree °C plasma. What makes stellarators different is their shape; a twisted pretzel ring, designed by a supercomputer for millimeter accuracy.

W7X is a very unique kind of stellarator. Not only is it the biggest in the world, it’s also one of the few truly “optimized” stellarators, which means particles don’t drift off their flux surface, ie. they don’t smash into walls wasting precious fusion potential. W7X’s design also utilizes “island divertors” (see below) to prevent plasma within the stellerator from leaking out and getting too close to the walls. Thanks to these divertors, the containment structure is safe from the superhot plasma, and the plasma is safe from junk entering.

Thanks to these advances, among others, W7X is the most advanced stellerator on the planet, making it our best bet to understand just what makes plasma tick and how to better confine it in the future for a real fusion power plant.

On the 11th of January a paper by a team at the University of California San Diego was published online detailing a breakthrough in the field of inertial confinement fusion, specifically visualizing exactly how energy is dispersed in fast ignition. Fast ignition fusion works by compressing a ball of fuel with hundreds of high-powered lasers which stays compressed under its own inertia, hence the term, “inertial confinement”. Shortly after compression, one single super-high-intensity laser heats the fuel even further to quickly ignite it and achieve fusion.

What the San Diego team did was figure out a way to visualize exactly how energy is delivered to the fuel pellet using tracers of copper in the fuel which send off detectable x-rays when hit by lasers (see image below). Prior to this imaging technique, shooting the ignition laser was a case of crossing your fingers and hoping for the best. With this advancement however, scientists can now see exactly where energy is being delivered, and aim the ignition laser into the densest region of the fuel with precision for maximum efficiency.

Using the copper tracers, experimenters were able to achieve a record high 7% efficiency in energy delivery, which is a fourfold increase upon previous fast ignition attempts. Computer models predict that upscaling the fast ignition design could yield a 15% efficiency, which would make fast ignition a viable competitor against tokamaks and stellarators.

There have certainly been some exciting times in the fusion field these past two months! Stay tuned for more fusion and assorted science news, no doubt 2016 will bring many interesting and exciting advances in all fields of science and technology. Oh yeah, didn’t Caltech find a new planet in our solar system or something…